Calm During the Storm

It is 6pm and the question is…

What are we going to have to for dinner?

What we had planned did not get thawed, which as become the norm around the house. We are trying to figure out what we are going to eat as the Kid is playing around in the kitchen. We have “baby proofed” as much as we can in the kitchen as we do not want him getting into many of the cabinets. There are a couple that are just to difficult baby proof however and so we decided that it would be ok.

The Kid has decided that playing with those drawers that we left un-baby proofed would be rather fun. He pulls the drawer open that contains all the silverware. He is trying to reach into it but has yet to reach the height of real danger. Hot Mama is leaning up against the counter next to the drawer that the Kid has opened and does not realize that her finger is in the line of fire.

The Kid slams the drawer and Hot Mama’s finger in it as well. Hot Mama immediately shouts in pain and falls to the floor and cries.

The Kid looks up at me like “What did I do?” Before I can think about the Kid I am worried about Hot Mama I lean down to make sure she is ok, obviously she is not but at least I am comforted by just asking her. The Kid realizing what he has done starts crying and falls down right next to mom.

Hot Mama said that we could wait for a couple of hours to see if the pain would subside before heading to Urgent Care. Knowing that a trip might be in order, I immediately start making phone calls to see if anyone deals with broken fingers, it was assumed by both of us that it was. The place we normally go to does not have a X-Ray tech on staff so the calls continue until finally I find one in the chance that we do have to go.

As the night goes on her pain does not stop. The diaper bag was packed, the boy scouts taught me to always be prepared, and very calmly and in a single file line we head out making sure not to say a word or else we would lose our recess.

The drive to Urgent Care reminded me of my drive to the hospital when the Kid was born, lots of screaming and moaning… in pain, and get your mind out of the gutter. When the nurse calls us back the Kid immediately starts getting into everything in the room. Making sure that Hot Mama was ok, I then take the Kid out into the waiting room or for a lack of a better term, his play room.

I have never seen the Kid have so much energy in his entire life. Running in places that we were not allowed to go and at some point the secretaries commented to Hot Mama, “Your husband is earning his keep out there.” Than a comment came from Hot Mama that would make most involved and SAHD’s anywhere proud. “Oh he has earned it, he spent the first 18 months of the Kid’s life being the primary care giver and taking care of the Kid.” This came after a verdict of a broke finger to her! You know you have an incredible spouse when even in a moment of pain they can say/defend you like that. 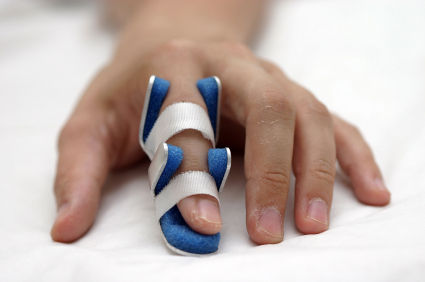 Not her finger but you get the point (© The Rookie Dad)

Where I am going in this post before I get long-winded and bore the death out of everyone, which who is still reading by this point so I could just babble on and on without even reaching the climax of this story, is that as parents/spouses isn’t it amazing how calm the other one is in a moment of pain or distress?

I really did not do this story justice, and I realize that since no one is still reading I could just add that in. HAhA!