← How to NOT Raise a Toddler
Powerful Lesson Learned →

The Kid: The Crossdresser

Sitting on the couch watching the TV, watching shows that we won’t be able to watch once the cord is cut this week, the Kid was playing by himself.   Hot Mama said that he had been playing that way all day.  Not wanting to play with her or me when I got home.  Which is fine.  It allowed me to have to have some time to cool down after a day at work. 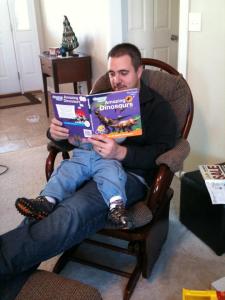 The Kid gets up and walks over to us with a book, the same dinosaur book that I can’t pronounce just about any of them with the exception of Turtle.  In fact there is a dinosaur in there that I swear is named, Para-syphilis, and I have told the Kid to stay away from that dinosaur.  This book is getting so annoying.  I have been accused of just opening the book and letting him turn the pages without me reading it to him, I am that annoyed with it.

After he is done with the book, he goes back to playing for a while.   Playing with his new Little People School Bus, which now after a tragic trash incident we no longer have the driver and is now driven by a farmer, he throws one of the bus riders across the room and he gets up.

He walks behind the ottoman which at this point in time puts his feet out of our view.  We see him looking down and wonder what he is doing.   He walks away and I look down and this is what I see…

But I see him wearing mom’s shoe!

I am sure that the only reason he wants to put on Hot Mama’s shoes is because they are easy to get on and he can halfway walk in one of them. Still none-the-less funny and another adventure in parenthood!

← How to NOT Raise a Toddler
Powerful Lesson Learned →