I guess this event is a big deal right?  At least that is what I am told, and as a parent we are supposed to do what we are told right?  So here goes the story about the chipmunk’s first haircut:

One of the ways dad thought about saving the family money is by asking his wife if she would give me a haircut.   She has been doing this for him for about a year now.  Granted it only saves the family about $20 bucks a month, but still saving is saving.   Dad was really never that big on making small talk with the person cutting his hair.   His philosophy was always “just do your job, and you’ll get your tip”  Now he doesn’t have to worry about tipping or small talk, in fact his hair stylus now is very attractive, smart, and fun to talk with!

The chipmunk was in need of a haircut,  so mom and dad decided to give him his haircut!

The chipmunk never knew what he was in for when mom and dad sat him in his bumbo chair (quite possibly the greatest parenting invention EVER).   He was smiling and having fun as dad was setting up the video camera and getting his still camera ready (can you tell I’m a tech nerd?).   Then the clippers came out.  He still didn’t know what was going on.  Mom slowly started running the clippers through his hair.   His first look was shock and surprise!

“What is this thing shaking my head and making this strange noise?” I’m sure were the thoughts going through the chipmunk’s head. 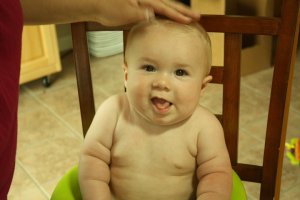 Shock and Surprise! (© The Rookie Dad)

Soon the chipmunk’s shock and surprise turned into shock and scared.  He started whimpering and moving his head in such a way that he was trying to revolt from getting his hair cut.  At this point the buzzing of the clippers was part of what was scaring him.   That mixed in with the chipmunk not liking anything that feels strange on his head (the chipmunk still doesn’t like the feeling of water on his head).

Mom and dad kept telling the chipmunk that everything was going to be ok.

Shock and Scared (© The Rookie Dad)

“Just hold your head still” was said by mom and dad a handful of times during the five-minute venture.

Little did the chipmunk know, that as soon as mom was done cutting his hair that he would be able to impress the ladies even more.  He has always been a ladies man.   It is amazing how the ladies at the school where his mom teaches just flock to him when he is brought up to school.

“Mom, hurry up!” he screamed.  Well, ok maybe the chipmunk didn’t actually say that but he did scream, and for the sake of translation, let’s say that he said that.

One Sharp Dude (© The Rookie Dad)

Finally, the five-minute ordeal was all over.  The chipmunk looked even more sharp then had before.  He won’t be able to keep the ladies away, which dad won’t have a problem with but before that happens, they might need to have a talk.

What the chipmunk doesn’t know is that in another five months when his hair grows out again, he will have to go through the ordeal again.   Not only will he have to endure it but so will mom and dad.  The question is, will the chipmunk scream, cry, laugh, or smile?