Upon hearing the news about the deadly tornado outbreak in the southeast U.S.  it started making me wonder what have we done as a family to prepare for such an event.

My wife hates, and I mean HATES, even just a thunderstorm so when we were looking to buy a house made it very important that we buy one with a basement.  Here in the midwest why you wouldn’t buy a house without a basement is beyond me.   When we were looking at this house there was something that she liked that put it over the top for her, there was a tornado shelter.   We live in a town where the west side was hit by a tornado in May of 200o so in the newer subdivisions most of the houses have basements.   It gives my wife a sense of safety which I was willing to pay more for. 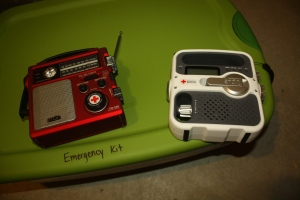 We also have two weather radio’s down in the shelter… why two?  I enjoy having a sense of redundancy!  Not only do we have those weather radio’s but we also have our iPhone which are outfitted with weather radio apps!  So we will be able to monitor four weather radio’s at the same time! All I need is 4 tv’s to monitor all four over-the-air networks and I would be set!  Now that I think about it… that might not be a bad idea!

Now we have a very sophisticated emergency kit!  Extra clothes, formula for the chipmunk, water for us… oh wait that’s not for us that’s for the chipmunk when he needs formula, and shoes (I told my wife that if there is a storm, more than likely I will be up with shoes on anyway even if it’s the middle of the night).   Thanks to the hospital for providing us with changing pads (those blue folded items in the picture) which came from when we were in the hospital (I’m sure most of my women readership know exactly what they are) and also we had some dry baby wipes that are activated by water (from the hospital) that we stuck in there.   I’m starting to think that we might need to put a case of water down there or else I won’t get any water.

We are still building this kit but atleast we have something down there ready for us.   Maybe we need to add some big canned food items down there just in case we need to “survive” for a few days… but then in about 15 -20 years we would end up eating it so it doesn’t go bad (The office, Dwight… anyone, anyone).

I feel for the people in the southeast and I hope that we never have to deal with something to that nature.  This is something that no one wants to have happen.  I have personally seen the effects of a tornado on a town more than once and it is absolutely devastating!  I remember the night of the Greensburg, Kansas tornado.  It is one of those things that I remember where I was and what I was doing.   I was watching KWCH out of Wichita in our TV station at Fort Hays State University (I was actually there if something happened in the city we were in to cover it for news), and I remember when the meteorologist came out and said “We now have a Tornado EMERGENCY for the town of Greensburg, now is the time to take shelter!”  I come from the area of the U.S. where when we hear Tornado warning and we all go outside to see the thing, but if I would hear Tornado Emergency, (which for those of you who don’t know… is much worse than just a Tornado Warning) I would seek shelter IMMEDIATELY!

I remember looking at the radar and seeing the hook in that storm and I was freaked out.  My dad who was actually heading back home (needing to go through Greensburg) from a softball game.  He called me to ask if they should just wait out the storm in Pratt or if they would be good to go.  I told him and the team to wait in Pratt it doesn’t look good for Greensburg.   I’m so thankful I said that because when they would have gone through Greensburg, the tornado hit the town.

My experience with tornado’s don’t compare to what they are going through in the southeast… but I want everyone down there to know that my thoughts are with them!